New WorkCover and TAC medical certificate yet another burden

From 1 July, both WorkCover and the TAC have introduced new Capacity Assessment Forms that have replaced the old medical certificates which had to be filled in by the treating doctor.

Monthly capacity certificates have always been a requirement for maintaining eligibility for income benefits under both schemes. These certificates had to be submitted to WorkCover, or in the case of road injury to the TAC, every 28 days following a consultation with your doctor. But whereas the old forms were relatively simple for a doctor to fill in, the new certificates require an exhaustive examination of a patient’s physical and mental abilities.

A reversal of proof

Previously, a doctor was required to simply indicate that there had been no significant change in the injured patient’s condition, and that he or she continued to be unavailable for work. That is to say, the assessment was designed to indicate what the patient could not do.

Furthermore, to the list of physical capacities, the doctor is required to assess the mental capabilities of his or her injured patient against criteria such as attention span, memory and judgement.

The practical effect has been twofold.

First, it lumbers the treating doctor with a significant additional time consuming burden; an issue that has been severe source of aggravation to many doctors that I’ve spoken with.

Second, it has makes it easier for WorkCover or the TAC to terminate benefits. This is because, armed with a detailed list of what a claimant should and shouldn’t be able to do, covert surveillance – which is commonly employed by both injury agencies – can more easily be abused to attempt to determine whether someone has, for example, been able to stand or walk longer than described on his or her capacity certificate.

It’s a ready-made check list against which any under cover surveillance agent can file a negative report on a recipient.

The new Certificates of Capacity are a real threat to the continuity of medical and income benefits. They will lead to the termination of benefits for people who have in just once instance been found to have exceeded one part of their capacity assessment.

This is an unwelcome burden on what, in the vast majority of cases (in excess on 99% in my experience), are genuinely injured workers. 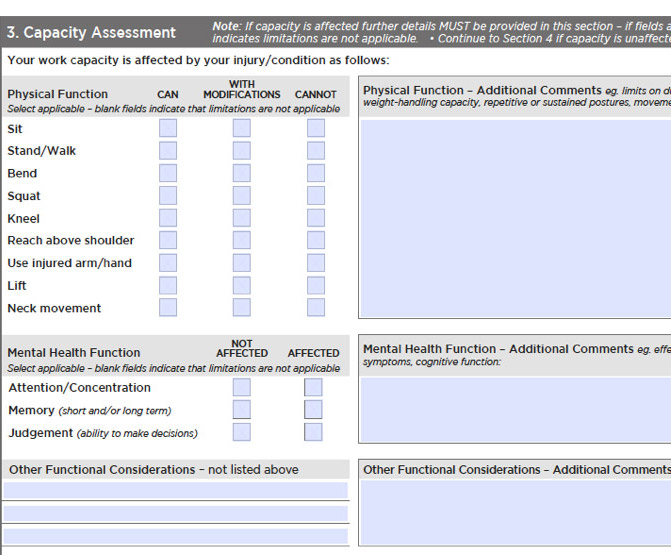