Part 3: Future insights from Orm and what matters most today

In a rare interview, Orm Thomas - one of the founders Ryan Carlisle Thomas - shares his thoughts on where law is headed, where he likes to spend his time and what he does to make a difference today.

Is there a difference between the skill set of a lawyer in Melbourne’s CBD and regional Victoria?

It depends on what you’re working on and the size of the practice. If you’re in a small practice with 2-3 people, you probably have to do everything and that has its own advantages and disadvantages. Sometimes you’re more isolated in a country office, whereas in the city it’s a constant exchange of information. However, fundamentally, it doesn’t matter who it is or where they’re based, we’re always asking our clients to look at things from a new perspective. There are great advantages in spending time in regional areas as it broadens your skills and forces you to try a whole lot of things and consider what areas you might specialise in.

There is one school of thought that technology will change the face of law and will ensure greater accuracy in results. What are your thoughts on this?

Law is about relationships. The interactions between people, Government and various interest groups is immensely fluid and involves a succession of judgements which can’t technically be made. The methods of research have enormously expanded and what I once did manually is now often done in other ways.

As I've been practicing for 48 years I have been lucky enough to be involved in a large number of reported decisions. In terms of research, people have great capacity in computer technology. My only advantage is that I have in my memory a number of decisions so I can cut corners.

My problem with the computer research is at times, terms of reference are too many. For example, I once ran a case which turned on the question of "what is Vegemite?" and trying to Google or otherwise research that would be rather difficult.

Unfortunately the law is not simple and even where legislation seems clear, it can often be interpreted in a number of different ways.

What’s your most rewarding work of late?

Much of my time now is spent on issues relating to unions complying with their regulatory structure. I therefore work on rules, amalgamations, constitutions, constitution structure, elections etc. I also have a supervisory role in relation to our retainer matters with the nurses unions.

I have acted on many occasions for not for profit associations on a pro bono basis through close friend and former union secretary Chris Northover.

I was asked to assist an affiliate of the international labour organisation whose members on the Solomon Islands after negotiating a small wage rise, were denied the rise and sacked. They were evicted from their accommodation on the Island of Guadalcanal. The workers were from another island, Melaita they were Polynesians and the inhabitants of Guadalcanal Micronesians. There was a lot of antagonism between them. When they were evicted they were starving and homeless. We formed a team and engaged the barristers Steven Howells and Judith Bornstein on a pro bono basis, ran the case in the Solomon Islands and were successful. I also advised in relation to similar matters in Papua New Guinea and Fiji.

I am a director of the Child Labour Schools Company or 'Too Young To Work' program. The company's project officer is Chris Northover and through our agents in India, we have built three school buildings, including a residential school for children who are orphaned or unable to live with their parents and maintain the schools. We are presently trying to ensure the sustainability of these schools with the relevant Indian Governments.

These children are in child labour in the brick kiln and quarrying industry. They often start work at the age of four and if they continue in the industry, they do not have any schooling and have a life expectancy of about fourteen. 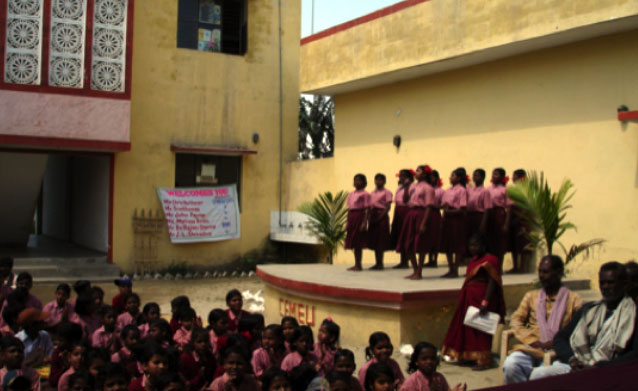 The girls at the Belgacchi School presenting their story in dance

Our program has also assisted in setting up a series of women's self-help groups. These are small groups of local women with tiny amounts of seed money and bank and union assistance, who create small businesses. For example, buying a buffalo and creating products from it, or weaving, making and selling sweets etc. This program has been immensely successful and has been taken up in various parts of India.

Although I have been to India on several occasions, the project manager has been annually for about 17 years. Some of the areas are difficult to get to, however the children are great and the circumstances they have been taken from are horrendous. Some of the children are orphaned and have virtually been slaves before they were brought into the comfortable environment and school.

An independent barrister recently described Ryan Carlisle Thomas as "a lot like the other legal firms that specialise in workplace injury and industrial law - except they’re kind."

A culture of kindness comes from the people within. John Ryan and Bob Carlisle were immensely kind - tough but kind.

I’m the ghost of Christmas’ past clanking my chains as I haunt others (laughs)... and I do hope the kindness is still there and remains.