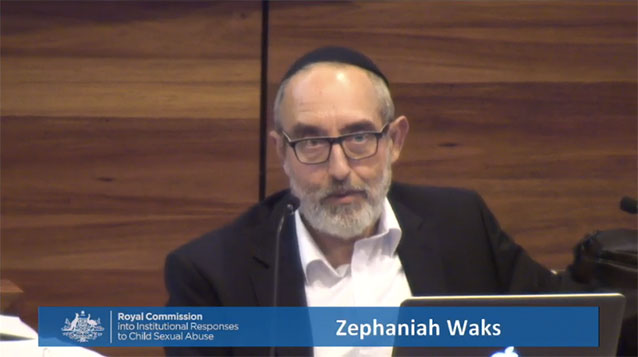 "We felt our world was flipped upside down. Every aspect of our lives involved the Yeshivah community. We lived across the road. I felt like we were reduced to nothing and had lost all our friends. This caused immense emotional pain and trauma to me."

This was Zephaniah Waks’ day at the Commission, and when as he made this statement, he was almost reduced to tears.

Like his son, he spoke of the increasing isolation and ostracism that he and his family suffered at the hands of the Yeshivah religious community, once his son had revealed that an employee of the centre had sexually abused him.

He told of how he had been verbally attacked in public by prominent members of his community, saying how this made him feel embarrassed and demeaned, so much so that he felt "there’s a war on now".

At one point, he described how Rabbi Telsner, son in law of the late Rabbi Groner, the man in charge of the Centre at the time of Manny’s sexual abuse, flew into a rage during a public sermon at the main Yeshivah synagogue. "Who gave you permission to talk to anyone, which Rabbi gave you permission?" he said, clearly directing his comments at Zephaniah.

He then threatened excommunication to anyone who disobeyed a Rabbi.

The Rabbi was almost "frothing at the mouth", according to Zephaniah, who in reaction to the tirade walked out accompanied by his wife and eight other members of the community.

The disappointing thing is that Zephaniah felt things could have turned out so differently.

At one point during his testimony, Manny’s father explained how he had asked Yeshivah community leaders to issue an email calling on the community not to blame the survivors of abuse and their families.

If this had been done, Mr. Waks said, he had "zero doubt" that it this would have "changed everything".

No email was sent. And nothing changed. And so the war and ostracism went on.